With FlexProtexx, a flexible protector made of foam glass granulate, six students from the Internatsschule Schloss Hansenberg won over the judges at the German Finals of business@school, the educational initiative of the international management consultancy Boston Consulting Group (BCG). Second place went to the team from the Erzbischöfliche Liebfrauenschule in Cologne with sustainable confetti made from wilted flowers. The team from Gymnasium Puchheim came in third place with a sensor for optimal air quality while gaming.

Munich, June 21, 2022. “Around 1.5 million Germans regularly go skating. But 79 percent don’t wear any protective equipment.” With these figures, Jakob (18), Jan (18), Joel (17), Julius (17), Maxim (18), and Tijan (18) introduced their presentation. They want to change that with their new protector FlexProtexx. Normal protectors often pose a hindrance while skating. But FlexProtexx offers maximum protection without restricting freedom of movement thanks to the nonnewtonian material it contains. The team collaborates with well-known street artists to get the right look.

The technical innovation and the thorough analysis of the market and customer segments persuaded the judges: With this business idea, the students from Internatsschule Schloss Hansenberg in Geisenheim prevailed against the eleven other best teams from all over Germany to win the business@school German Finals. “The other teams were all so strong; we really didn’t think it would be enough,” Joel said visibly pleased. “All the work of the last eight months has paid off.”

Expert judges analyzed the teams’ business ideas
Once again over the three phases of business@school, more than 1,000 senior high school students from roughly 70 schools tried out business for themselves. As the climax of the project year, they tested their entrepreneurial skills by developing innovative business ideas, supported by their teachers and roughly 400 volunteer coaches from over 20 well-known companies and BCG.

Eleven teams qualified for the finals in eleven Regional Competitions throughout Germany. Two additional tickets for participation were awarded with special prizes: The team from Gymnasium Ottobrunn won the Social Entrepreneur Prize donated by SOS Kinderdorf e. V. with their idea of Resctec, and the team from the Erzbischöfliche Liebfrauenschule in Cologne, already winners of the Cologne Regional Competition, won the Sustainability Prize sponsored by Boston Consulting Group with their idea ReFlower. All twelve teams presented their business ideas live at Boston Consulting Group’s office in Munich and then answered probing questions from the judges, who were immensely impressed by the students’ business ideas and well-thought-out business plans. 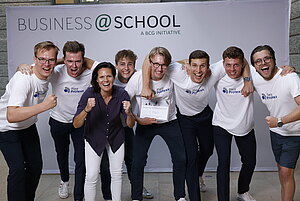 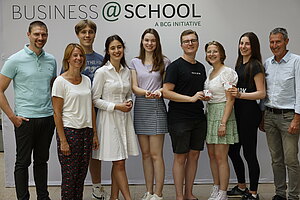 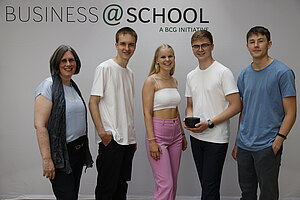 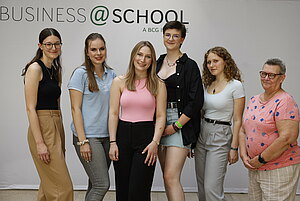 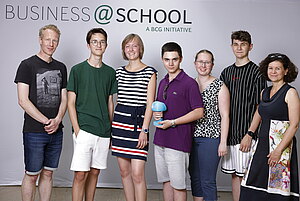 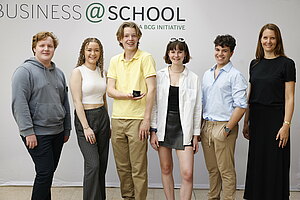 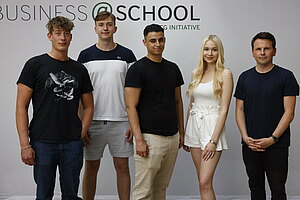 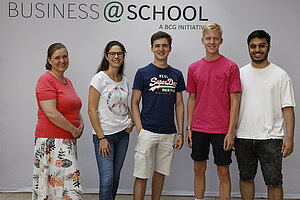 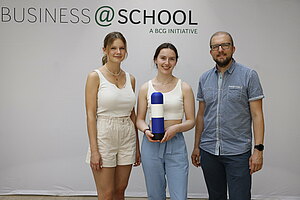 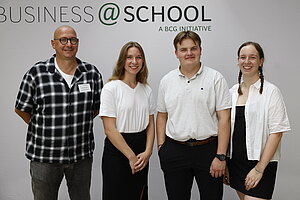 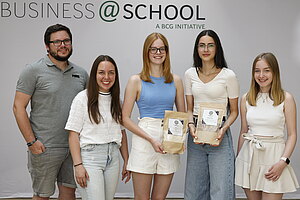 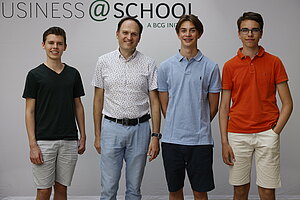 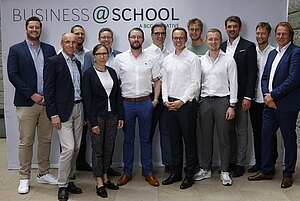 Jury of the preliminary rounds 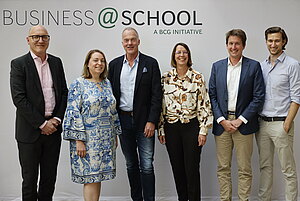 Jury of the main round

ReFlower earns second place for team from Erzbischöfliche Liebfrauenschule in Cologne
Close on the heels of the winning team from Geisenheim, a team of six from the Erzbischöfliche Liebfrauenschule in Cologne nabbed second place. Brian (17), Greta (17), Leif (17), Lotta (17), Sofiya (15), and Vita (17) competed in the search for the best student business idea with ReFlower, biodegradable confetti made from recycled cut flowers. With the self-developed method of making the confetti, the flowers retain their bright colors and are perfectly suitable for weddings and other celebrations. “Your storytelling is absolutely convincing,” the judges agreed.

Third place for Gymnasium Puchheim with Praemisy
Praemisy got four students from the Gymnasium Puchheim to third place. It’s the brainchild of Benedikt (18), Jasper (17), Laetitia (17), and Marco (18): a sensor for gamers that measures the oxygen level in the air and notifies the gamer when reaction speed is affected due to a lack of oxygen. The sensor detects breaks in the game so as not to interfere. In this way, the team wants to increase gaming performance by 20 percent. Among other things, the judges were impressed by the team’s innovative financing method using crowdfunding.

Twelve teams from different schools participated in the German Finals: