With their product FuEco—a sustainable grill starter made of cocoa bean pods—the four students from the Städtisches Siebengebirgsgymnasium took top honors at the digital German Finals of business@school, the educational initiative of Boston Consulting Group (BCG). Second place went to a team from the Erzbischöfliche Liebfrauenschule in Cologne for Courtable, a system of lines for creating your own basketball court. Finally, a team from Augustum-Annen-Gymnasium of Görlitz took third place for Ganzze Pflanzze, their two-layer veggie chips made of whole carrots.

Munich, June 22, 2021. "The salad is on the table, the guests are at the door, the grill is heating up—and your backyard smells like an industrial zone," said Josephine (17) as she launched into the winning team's presentation. This is a widespread problem with petroleum-based grill lighters, but Josephine and the other members of her team, Alina (16), team spokesperson Erich (17), and Luis (16) of the Städtisches Siebengebirgsgymnasium in Bad Honnef, developed an alternative: FuEco grill starter is made of cocoa bean pods (a by-product), along with rapeseed wax and a hemp wick. Best of all, they smell a little like chocolate. The combination of ingredients ensures that the grill fires up quickly and keeps burning—and is thus ideal for barbeques. And the team has already found a prominent supporter in Reiner Calmund, who will serve as marketing ambassador. With this business idea, the students from Bad Honnef prevailed against the nine other best teams from all over Germany to win the business@school German Finals.

"Of course we hoped we would win, but did we expect it? No, for us it was fantastic just to make to the Finals," said Alina happily. In recent weeks, the creators of FuEco further refined their idea: "We had a little less than a week to revise our presentation. That was really intense," remarked Josephine. Team spokesperson Erich revealed that the four students decided to turn their idea into reality even before the Finals: "We decided a few days ago to start our own business." If the team members learned one thing from their participation in business@school, he said, it was this: "If you really want to, you can do anything."

Live presentation shown virtually to an expert panel of judges

Despite school closures and remote learning, over 1,000 senior high school students from around 70 schools proved their initiative by forming teams online and putting together impressive business ideas, including corresponding business plans. They were supported by their teachers and roughly 400 volunteer coaches from over 20 well-known companies and BCG. Rather than attending an event in Munich, as in past years, all the competing teams presented their business ideas live in a videoconference and then answered probing questions from the judges. "In spite of the challenges, the participants showed enthusiasm, stamina, and resilience in working on their business ideas and found new ways to learn. That shows that they are anything but a 'lost generation.' These students have mastered numerous core competencies that will help them in the future—even though they're not part of the curriculum," emphasized judge Matthias Tauber, Managing Director and Senior Partner at Boston Consulting Group. The students proved their prowess in terms of substance, too: The judges explicitly praised the team from Bad Honnef for their strong marketing concept and successful negotiations with cooperation partners, in addition to their well-thought-out product idea: They have already finalized purchase agreements with the retailers Toom, Rewe, Edeka, Kaufland, and Rossmann. 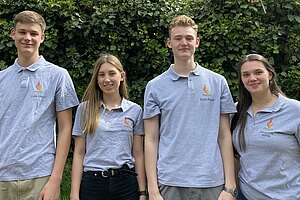 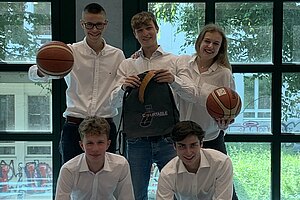 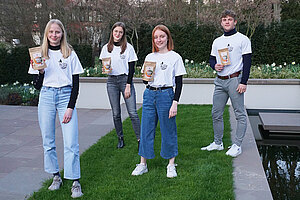 Close on the heels of the winning team from Bad Honnef, a team of five from the Erzbischöfliche Liebfrauenschule in Cologne nabbed second place. Anno (17), team spokesperson  Carla (16), Christian (16), Justus (16), and Kolja (17) entered the search for the best business idea with their product Courtable, a system of lines for creating your own basketball court. It can be quickly set up and torn down, matches official court size, and is thus ideal for honing your skills in a space of your choosing. Priced at $40, the product will be for sale primarily in the U.S., said the team. They were able to acquire basketball legend Dirk Nowitzki as brand ambassador. The judges agreed: "This is a passionate team with a clear, bold vision."

With Ganzze Pflanzze, two-layer veggie chips made of whole carrots, the team from Augustum-Annen-Gymnasium of Görlitz took third place. "We're here to fight food waste," declared team spokesperson Emma (17), Johann (17), Johanna (16), and Louise (17) at the start of their presentation. Their product is focused on using every part of a carrot—the root is dried in slices and then spread with pureed, spiced carrot tops. The team buys only organic, and is already working on developing ideas for other vegetables. "A great product—healthy and sustainable, backed up with a consistent strategy," the judges concluded.

A total of ten teams with the following ideas took part in this year's German Finals: